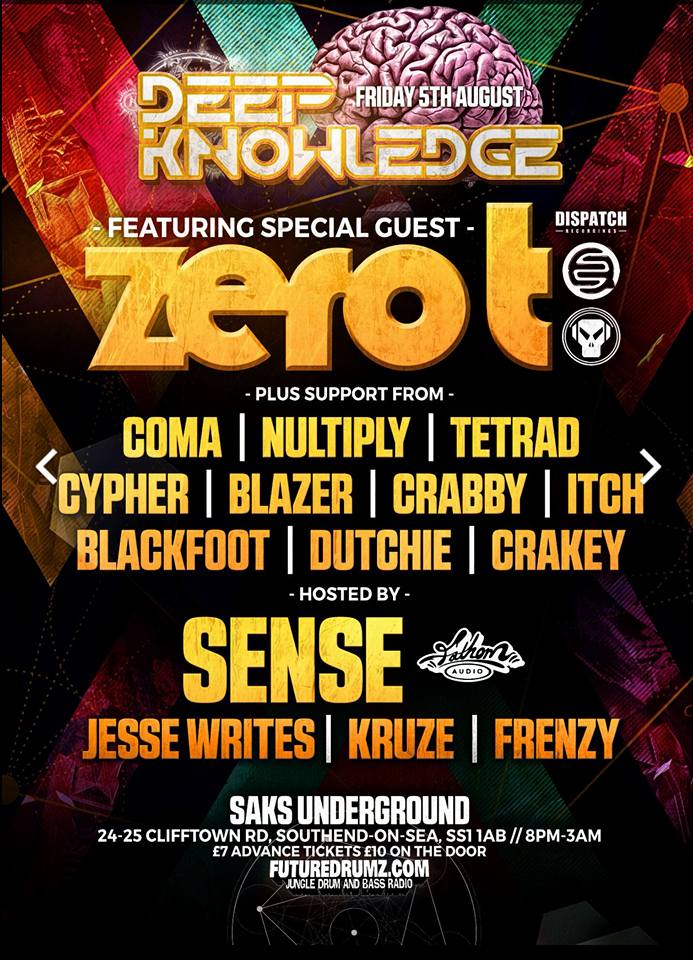 Deep Knowledge are absolutely hyped to announce the legend that is Zero T will be blessing Southend with his raw and rolling presence!
With an extremely extensive back catalogue, spanning over arguably the very best Labels the Drum & Bass industry has to offer (Metalheadz, Quarantine & Dispatch to name a few) along with the most creatively astounding producers in crossover projects (Alix Perez, Fierce, Break etc) to put it bluntly, the man is an analogue magician!

For such a great presence we felt we had to really think about an Appropriate host that would not only match the depths of underground that Zero T will bring but also to match in there finesse of craft and creative Flair…
Who better than SENSE!
A serious wordsmith from Fathom Audio who punches the mind with intelligent and powerful lyrics, whose voice captivates and commands attention every time he blesses the Mic.
Not only are they a matching force, they also have projects that they have worked on together so you can probably expect some live treats!

As support we will be introducing some new faces to the DK rosta aswell as some debut sets from future Deep heads along with some of our familiar Veteran selectors!

We will be providing 15K soundsystem so expect to be rattled!

Doors open at 8pm and will close at 3am
This is a pay on the door only night so arrive early to avoid dissapointment
£5 before 9pm £7 thereafter!

Over 18s only, ID will be required!
Dress to dance