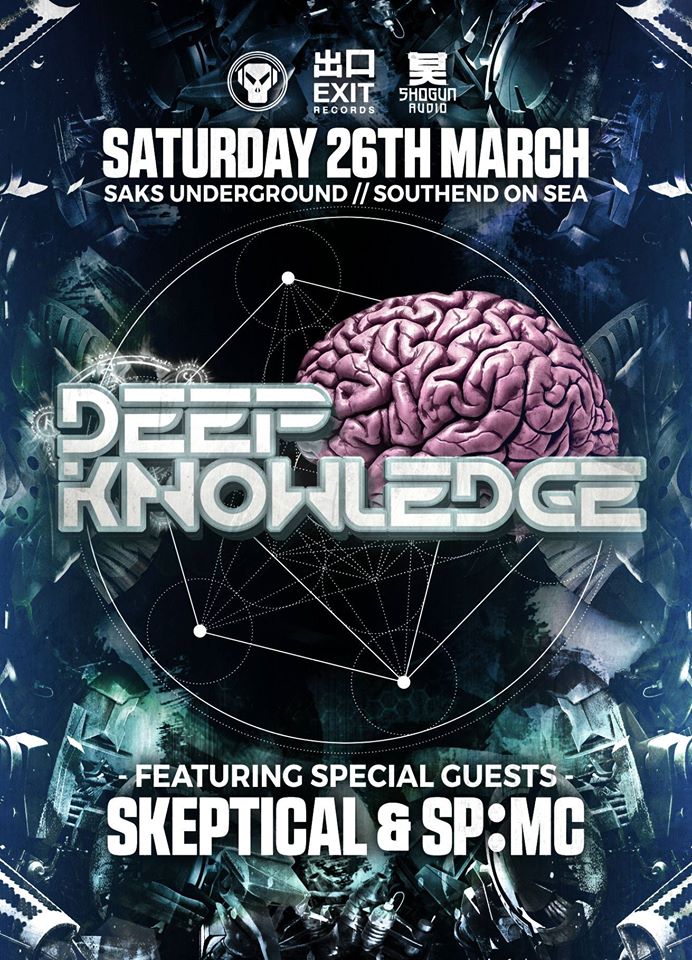 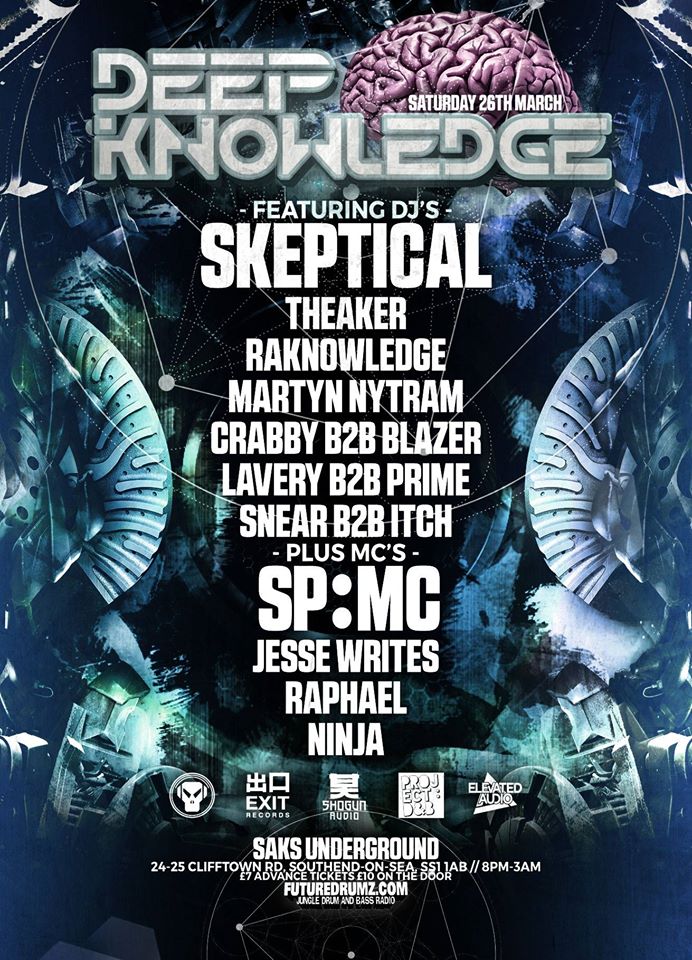 DEEP KNOWLEDGE returns after a succesfull launch, with a big weighty line up, enough to make the eyes of any seasoned drum & bass head water.

A 10-15k Funktion one Soundsystem ready to resonate southend
And more controllers than ever to ensure all aspects of underground d&b are covered!

As a DJ and producer whose natural passion for music in all its forms eventually spilled over into a full blown production habit, Skeptical has been responsible for some of the most damaging yet delicate tracks occupying the realms of current drum & bass.
Critically featured releases have been coming thick and fast on a range of the biggest labels in the genre. From the deadly Blue Eyes EP on the taste-driven label that is Ingredients Records, to a slew of impeccable releases on highly esteemed imprints such as Exit Records, Critical, Dispatch, Renegade Hardware, Broken Audio, Skeptical has smashed it out for almost every dark drum & bass label worth its salt.
And of course as one third of the team behind ‘Marka’ – the undisputed drum & bass champion track of 2011, Skeptical has attained a legendary status amongst the ranks of D&B producers. ‘Marka’ was a tour de force of ominous, intensely atmospheric production that goes off on the dance floor.
Skeptical is a producer who can stimulate your cerebrum with his innovative bass structures and put an exit wound in your brain with destructive DJ sets that have made him a Renegade Hardware favourite. Only the biggest of things are to be expected from a producer who has only just begun to give the drum & bass public a tantalising idea of his musical mettle.

Making the breakthrough into the world of the drum & bass MC is no small task, yet SP:MC has managed to establish himself as one of the busiest & most innovative on the circuit. Host of choice for the likes of Friction, dBridge and many more, his distinctive yet versatile style has also made him a favourite with top dubstep DJs such as Youngsta, Skream and Benga.
This mutli skilled individual has also proved to be a talented pro- ducer in his own right with releases on Tempa, Shogun and Exit (as Code 3, with Jubei & Dakuan). Winner of the ‘Best MC’ cat- egory at the DnB Arena Awards in 2011, SP:MC is without doubt at the top of his chosen profession.

With support from some of the finest controllers we could find, handpicked and ready to introduce you to the other side of drum & bass and constantly pushing the limits of sound and dance in events across the country.
You will not be dissapointed!

GIRLS FREE ENTRY & BOYS £5 BEFORE 9PM,
AFTER 9PM ENTRY WILL BE £10 FOR ALL.
ADVANCED TICKETS WILL BE AVAILABLE SOON AND LINKS ARE TO FOLLOW.
STRICTLY OVER 18S ONLY SO BRING ID AND DRESS TO DANCE!